POWER AND EFFICIENCY: UNDERSTANDING HOW TO SELECT THE RIGHT FAN

This article looks at factors to be considered when selecting the right fan to achieve the desired air flow volume. In particular, both fan and motor efficiency are explored. 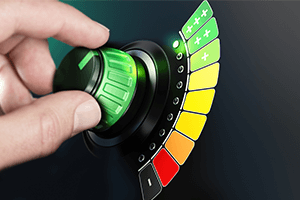 It is not just the power of the motor which needs to be considered, but also the power that the fan impeller requires.  There are two ways of defining fan power, both of which are important:

Both types of fan power are measured in kilowatts (kW).

As no fan (or indeed any other device) runs at 100% efficiency, the required Motor Output Power will always need to be greater than the maximum Fan Absorbed Power (i.e. Peak Power).  Direct driven fans operate at higher efficiency levels than belt-driven fans, as the Motor Output Power also needs to cover belt drive losses, which can be as much as 25% of the overall power requirement.

All motors will have a Nameplate Rating, which we can consider as being the maximum permissible Output Power of the motor.  There are two types of Motor Power ratings:

The Importance of Efficiency

When selecting a fan, cost is always a factor, but it is important to consider running costs as well as the initial cost of the fan itself.  The amount of electricity needed to run a fan to achieve the desired air flow will depend on the efficiency of both the motor and the fan.

There are some relatively simple formulae that you can use to calculate these efficiency values.

Let’s start with motor efficiency.  Motor output power is easy to determine as it is stated on the motor Nameplate, but the amount of electricity it will use depends on the motor efficiency. To calculate this, you need to know the Motor Input Power – the power input into the motor from the mains electricity supply. Knowing this, Motor Efficiency can be derived from the ratio of Motor Input Power to the Motor Output Power, and is expressed as a percentage.

So, for example, if a motor is rated at 7.5kWo (output power) and where it’s efficiency is 75%, it will have an input power requirement of 10kWi.  The difference between these two values is effectively lost energy, which can be detected in the form of heat.

Motor efficiency is generally influenced by the materials used (i.e. build specification), or the underlying motor technology. Motors with higher efficiency ratings tend to cost more initially, but will of course have lower running costs.

Calculating fan efficiency requires the use of a formula which takes both Fan Absorbed Power and Air Power into account, so is calculated by multiplying the Volume Flow in cubic metres per second by the Total Fan Pressure in Pascals or Newtons per square metre, divided by 10 times the Fan Absorbed Power in kW (see UNDER PRESSURE: THE BASIC PRINCIPLES OF AIR MOVEMENT to see how these are calculated)

The formula to work out Fan Efficiency is as follows:

Using this formula, it is possible to calculate the required power, like this:

Overall Fan Efficiency is another key factor as this relates directly to running cost and is derived from combination of motor and fan efficiency. The resultant single value is often referred to as Fan and Motor Efficiency Grade, or FMEG and is calculated by multiplying fan and motor efficiency percentages together – so, for example, if the Fan Efficiency is 85% and the Motor efficiency is 94%, then the combined Overall Efficiency will be 0.85 x 0.94 x 100 = 80%.

A Note on Temperature and Air Density

It should be noted that fan performance is always stated at Standard Air Conditions. In practice this means that the interaction of air pressure, humidity and temperature will affect air density, which will in turn affect the performance delivered by the fan.

Standard Air is defined as having an Air Density of 1.2kg/m3.  The colder the air, the denser it is, while the warmer the air, the less dense; air density varies proportionally to the ratio between two datum air temperatures, in Absolute Terms.