UNDER PRESSURE: THE BASIC PRINCIPLES OF AIR MOVEMENT

This article explains the basic principle of air movement; how creating a pressure differential is the key to creating a flow of air; and how we can measure pressure – the first step in selecting the right fan to provide the desired air flow. 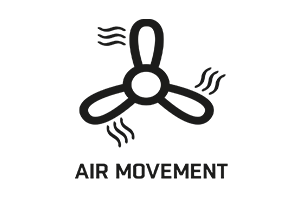 In one respect air is like water – it will naturally flow from an area of high pressure to an area of low pressure.  A domestic water system is generally under pressure (usually around 30psi), so when you open a tap, the pressure at that tap falls to zero, which causes water to flow to the low-pressure area.

The amount of air which will flow through a duct, and the speed at which it will flow, are both dependent on the degree of pressure difference which is generated (and by system resistance, or friction).  The higher the difference in pressure, the greater quantity of air will flow in a given period of time.

Understanding these basic principles is the key to selecting the correct fan which will deliver the desired air flow.

There are several different terms used in measuring and defining pressure.  As they are all inter-related, it is important to be familiar with each term, as well as the units used to measure them.

There are four main factors we need to consider:

How They Are Related

Given that Total Pressure is the sum of Static Pressure and Dynamic Pressure, we can deduce some simple formulae to help understand the relationships between each type of pressure:

The most common tool used to measure pressure both on site and in a standardised laboratory condition is a Pitot Tube (also known as a Pitot Probe).  Invented by the French engineer Henri Pitot in the early 18th century, it was developed into the form we still use today in the 19th century by Pitot’s compatriot Henry Darcy.

As well as being used to measure liquid, air and gas flows, the Pitot Tube is also widely used to determine the airspeed of aircraft, and the water speed of boats.

The three types of pressure are measured in slightly differing ways.  To measure Static Pressure, a perpendicular tube exits the duct.  The tube contains fluid, which is brought to rest (stagnates) as there is no outlet to allow the flow to continue. 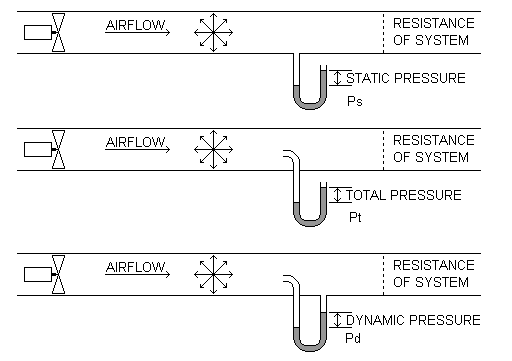 An alternative method is to use the ‘side tapping’ method, which relies on ‘tapping points’ on the side of the casing or duct.  However, this only allows the measurement of Static Pressure.  In order to measure Dynamic Pressure (and hence determine Total Pressure), it is first necessary to measure the velocity of the air moving through the fan.

A disadvantage of using a single side pressure tapping method (in a test duct) is that it can be affected by uneven pressure profiles within the system. To minimise this, it is usual for laboratory test ductwork to have multiple ‘side pressure tapping’ positions around the duct, so that an average pressure value can be obtained.