The EN779:2002 has remained unchanged for ten years and was updated in 2012. Intensive discussions within the European technical associations finally led to a substantial extension of the test norm. For the very first time a minimum efficiency for discharged filter medium was defined and became a compulsory part of the new test procedure. Additionally, it was possible to compare energy consumption on the basis of EUROVENT 4/21.

This DIN EN779:2012 will be globally replaced by the ISO 16890 in 2017, which revolutionizes the assessment and classification of air filters. Although the ISO 16890 is widely welcomed by the scientific community , at the same time it imposes great challenges to the test labs, the filter manufacturers as well as the filter trading companies.

The test bench is upgraded

The measurement is still perfomed with DEHS up to a particle size of 1 µm. In areas of particle sizes > 1 µm, KCl is used as test aerosol.

The discharging method, which became compulsory in 2012 as part of the main body of the norm called DIN EN 779, contains the discharge of small filter media flat sheet samples. Up to now these local minimum efficiencies were considered sufficient to induce conclusions for a fully assembled filter unit. The introduction of the ISO 16890 will make it necessary to discharge entire filter units. 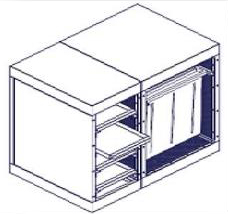