Fire safety in buildings is about protecting people, but also limiting economic losses and damage to the building. Preventing the spread of fire through material and fire dampers is key to this, and early detection of not just temperature rise, but smoke, is crucial to doing this effectively 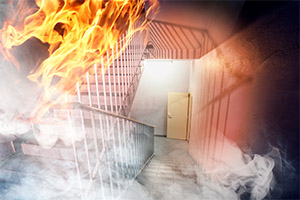 When designing fire safety systems for buildings, there are two over-arching targets which should be considered.

The first, of course, is to minimise personal injuries in the event of a fire.  Key to this is the ability of the people inside a building to leave it during a fire (as well as securing the safety of fire fighters).  That means the development and spread of the fire and smoke within the building needs to be restricted.

The second important target is to limit economic losses, minimising the damage to the building, and restricting the spread of fire to adjacent properties.

There are many methods for increasing fire safety in buildings.  Broadly speaking, these fall into two categories: early smoke/fire detection and the prevention of smoke; smoke management and extraction; and fire dampers to create smoke-free escape routes and prevent fire and smoke spreading to other parts of the building.

Early detection methods and prevention can include automatic fire alarms to enable early detection, and water sprinkler or water mist systems to stop the fire in its very early stages.

Fire Dampers can help to divide the building into several fire cells to prevent both fire and smoke spreading; each fire cell border, whether a wall, ceiling, door or fire damper, has a fire classed construction – more on this in a moment.

Smoke management in buildings enables us to control the movement of smoke via ventilation, using smoke extract fans and pressurisation fans.  Smoke extract fans can be part of a manual or automatic system to control and extract smoke from the room on fire,  Pressurisation systems are used to create smoke-free escape routes.  Normally the fan runs at the speed required to obtain the 50Pa over-pressure needed to achieve this.

Smoke dampers and smoke control ducts are often combined in a smoke extraction system, whilst fire dampers are used to stop both fire and smoke spreading to other parts of the building.

In building construction, walls can have one of three fire technical classes: R, E and I.  Whilst R indicates bearing capacity, it is classes E and I which can be classed as fire dampers.  E class is effective for limiting smoke spread, whilst I provides thermal insulation and thus prevents temperature spread.

If a wall has an E class, it will stop smoke from passing through the wall.  However, the temperature on the other side of the wall from a fire will still increase, which, with radiation heat from the wall, could cause objects on the ‘cold side’ to combust, thus allowing the fire itself to spread.

Fire dampers are tested with the same principal according to European standard EN1366-2.  All fire classes of wall construction are combined with a time criteria, ranging from 15 to 360 minutes.  For example, a wall with fire class EI 60 means that it will provide protection against both smoke spread and increase in temperature for 60 minutes.

It is important to realise that whenever there is a fire, time is limited – there is no fire class which offers protection for an unlimited period.

Fire detection is critical to the operation of fire dampers, as they will normally close when smoke and/or a rise in temperature is detected.

Traditionally, temperature sensors have been used for fire detection, with a rise in air temperature of up to 70°C at the location of the fire damper activating a mechanical spring to close the damper blade (with no electricity required).

However, it is now widely understood that smoke usually occurs much earlier than high temperatures, and for this reason, smoke detectors are now more commonly used, usually in conjunction with temperature sensors.

In such a system, smoke particles passing through the detector send a signal to the control system, which then interrupts the power supply to the damper actuator, and the damper closes, again without electricity.

Because smoke is generally detected more quickly than temperature rises, this means that smoke detection systems can enable earlier fire damping action than systems based on temperature detection alone.

Figure 1 demonstrates what a difference this can make. 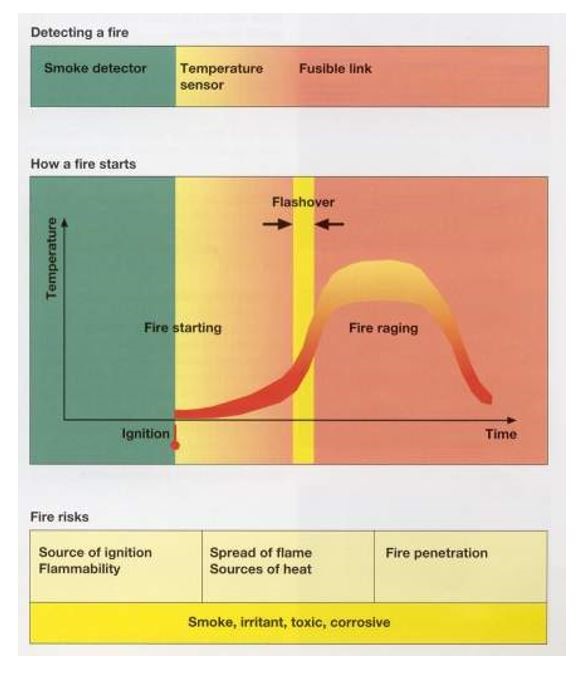 The green area depicts the period immediately after a fire has started.  At this stage the temperature has not increased, but there is smoke.  A fire damper with smoke detection will detect this and close directly.

A system using only temperature sensors will not come into operation until the ‘flashover’ stage (indicated in the illustration in yellow), at which point temperatures rise very rapidly.  Only then will such a system close fire dampers, by which time much smoke may have spread to other parts of the building through ventilation ducts.

Thus it can be seen that only motorised fire dampers, operating in conjunction with smoke detectors, protect against both fire and smoke.