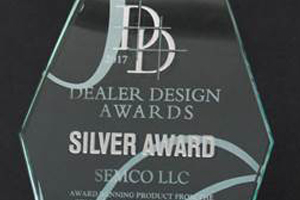 The Dealer Design Awards are given annually by The NEWS to award design excellence and innovation. This marks the fourth industry award for NEUTON and the first for NEUTON-Multiple Zone. NEUTON was the recipient of an Innovation Award at the AHR Expo 2016 and the New Product of the Year Gold Award from both College Planning & Management and School Planning & Management.