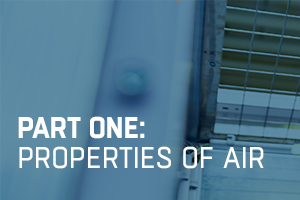 The Contents Of Air

The air in our atmosphere is made up predominantly of two gases: nitrogen (78%) and oxygen (21%).  This leaves just 1% for all of the other gases in the air.

Actually, the properties of air differ considerably depending on where in the world you happen to be.  Clearly, the air in the Sahara is very dry, whereas in the Amazonian rain forest it is much more moist.  Also, air pressure varies considerably depending on altitude, with the vertical distance from sea level to the summit of Mount Everest (the highest point on Earth) being 8848 metres – about 5½ miles.

An important metric in air property is the level of carbon dioxide (CO2).  The average CO2 level is approximately 360 parts per million (ppm), although this value is rising due to both pollution and the greenhouse effect.

Good ventilation systems will reduce the levels of indoor CO2 – the World Health Organisation recommends that these should be below 1000ppm.  Once the level gets to 1500ppm, the air does not smell fresh, and people breathing it will start to feel lethargic.

There is a ‘Standard Condition’ of air which is used to compare ventilation products.  This is defined as a density of 1.2kg/m3, which occurs at 20°C and an atmospheric pressure of 1013 milliBbar.

The amount of moisture in air is an important property of it, and it can be measured in a number of ways.

The first is the Wet-Bulb Thermometer.  When you wrap a water-soaked cloth around a thermometer bulb, the temperature will drop, due to the energy needed to evaporate the water in the cloth.  The drier the air is, the more water can evaporate, and the more the temperature decreases.

The temperature drop is known as the wet-bulb temperature; it can be used as a measure of the humidity in the air, and can be input into a Mollier chart (a graphical representation of thermodynamic properties of – in this case – air).

Normally the absolute humidity indoors would be in the region of 5-10g per kg of air; in a bathroom after someone had taken a shower, it could be as high as 20g/kg.

The third way of describing air humidity is Relative Humidity.  As the name suggests, this is the ratio between the maximum water that the air can hold (100%) and the actual water content at the current temperature.

Air is able to hold more water at a higher temperature than at a lower temperature, so if saturated air cools, it gives off condensate (this is what happens when the bathroom window becomes wet in winter, because the air around the cold glass is cooled).

The Dew Point is the temperature below which the water vapour in a volume of humid air (at a constant barometric pressure) will condense into liquid – this is why condensed water formed on a solid surface is called dew.

Enthalpy is a measure of the total energy in a thermodynamic system.  It includes the initial energy (the energy required to create the system in the first place), and the amount of energy required to make room for it by displacing its environment and establishing its volume and pressure.

The enthalpy measure of dry air at 0°C is 0 kJ/kg.

Calculating the cooling and heating power can be done in two ways, one of which uses the temperature and the other the enthalpy.  Using the temperature difference to calculate the power can only be done when there is no condensation in the process, as this method only calculates the sensible power, and not the latent power.

Sensible power is the amount of power required to be added to an object to increase its temperature, or the amount of power removed to reduce its temperature.  Latent power, on the other hand, is the power required to change an object’s state (from solid to liquid, or from liquid to gas, and vice-versa).  Total power is the sum of sensible power and latent power.

So if both sensible and latent power form part of the colling calculation, it is important to use the enthalpy formula to calculate total power; when calculating the heating power you can use either method, as it will give the same result.

Using the temperature difference to calculate the power involves the following formula:

Whereas the enthalpy formula is as follows:

Next: Properties of Air Part Two: Air Density and Air Calculation in an Air Handling Unit >>