Enhanced Design involves computer modelling of a project and selecting the best Controls philosophy, depending on the restrictions of the site and the scope of supply. In this article we look at computational fluid dynamics, Advanced Controls, and System benefits.

For a car park ventilation system which is designed solely for Pollution Control or Smoke Clearance – both more straightforward than a Smoke Control system – there is generally no need to perform a fire design calculation, and so the design phase involves just three steps: gathering data, qualitative analysis, and steady state analysis, using concept computational fluid dynamics (CFD).

The sheer complexity of the mathematical equations involved in Finite Volume Analysis means that it can only really effectively be performed using CFD.  CFD analysis is the process by which a computer representation of the car park is broken down into small volumes of air, each of which is subjected to a Finite Volume Analysis.

This is a resource-heavy and often time-consuming exercise, but one which is essential in order to optimally position Jet Thrust Fans, reduce dead spots within the car park, and model heat and smoke spread for advanced projects if required.

The resulting CFD report , with calculated solutions for pressure, temperature, X-, Y- and Z-velocity, as well as visibility and smoke spread, is a clear demonstration to both end customer and approving authorities that an engineering approach has been used.

CFD ensures that the specific project requirements are understood and incorporated into the design, and that the best possible system is designed for each specific car park.

There are essentially five Control systems which can be used on a car park ventilation system, with each delivering a different level of sophistication, effectiveness and efficiency.

The first is 24/7 Constant Operation, which takes no account of the actual usage of the car park, is not dependent on any other variables such as carbon monoxide or nitrogen monoxide levels, and simply operates the fans at the required speed for high pollution ventilation at all times.  This solution is simple, but it often results both in over-ventilation and high energy consumption.

The most basic modulating system is a Timer, which will operate the Jet Thrust Fans at pre-defined times based on the expected (rather than actual) usage of the car park.  The system will switch on or off regardless of the movement in the car park, which can result in either over-ventilation if set up incorrectly, or under-ventilation during unexpected busy periods.  When using this system of control, they need to be programmed so that the timer is overpassed and turns on the system in emergency mode.

The standard, ‘intelligent’ method of control is using CO/NOx Sensors, which operate the system depending on the level of carbon monoxide and/or nitrogen oxide detected in the car park.  Hence when there is a lot of movement and levels are raised, the control will operate the system at higher speeds; and when there is little or no movement, it will provide just background ventilation.  This is an energy-efficient solution, because it operates the Fans at the level required rather than leaving them running when not required.

The final type of Control system is Liquid Petroleum Gas (LPG) Sensors.  LPG leaks and exhausts can be very dangerous in confined spaces, and so where these types of vehicles are likely to be parked, LPG sensors will provide an increased level of safety, and may be a requirement of the project’s insurance.  They operate in a similar fashion to CO/NOx sensors.

Demonstrating The Benefits Of Enhanced Design

As an illustration of how an enhanced-design Jet Thrust Fan system can bring huge benefits, let’s take as an example the simple 80m x 50m car park we looked at in the last Ten Minute Read, as shown in Figure 1. 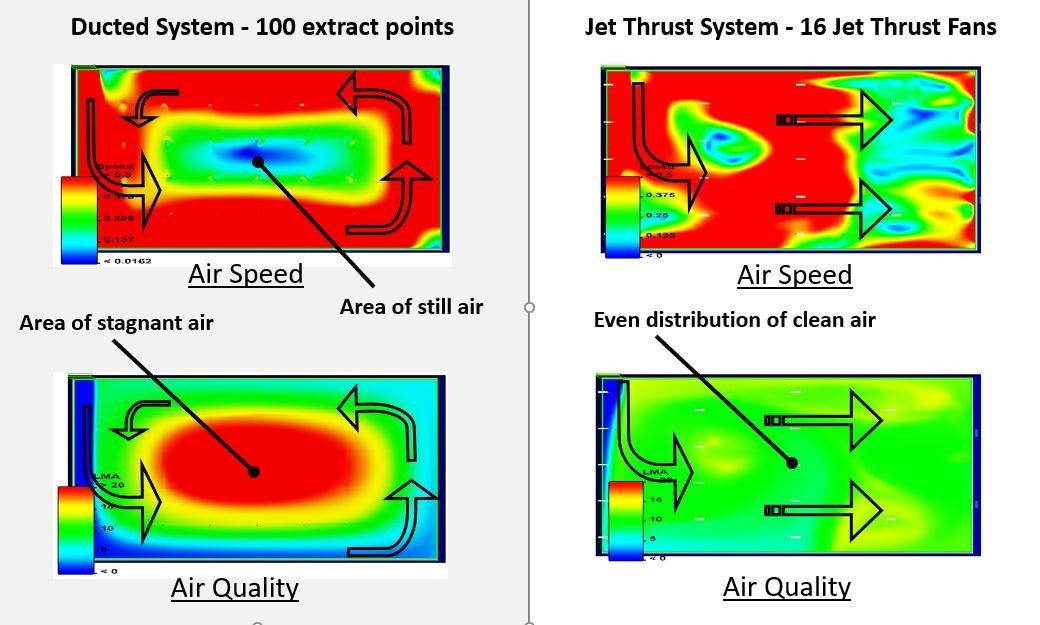 As well as providing a more effective ventilation solution, with more even distribution of clean air, we can also look at the efficiency and running costs of both installations – especially if we factor in different Control systems.

In summary, Advanced Controls systems reduce energy usage across the board, and also that the total energy consumed by the enhanced-design Jet Thrust System is lower in every scenario.